Primetals Technologies has received the Provisional Acceptance Certificate (PAC) from ArcelorMittal Poland S.A. for the replacement of the second LD(BOF) converter at its Dąbrowa Górnicza steel works. Like its counterpart, Converter #1 – already replaced by Primetals Technologies and commissioned in November 2016 – Converter #3 was a turnkey construction. Its replacement had already been agreed as an option in the third quarter of 2015. The second converter will also be suspended by the maintenance-free Vaicon Link 2.0 which not only has a long service life but also minimizes the stresses caused by thermal deformations.

The converters previously used in the Dąbrowa Górnicza steel works had reached the end of their life cycles. As in the case of Converter #1, Primetals Technologies supplied the vessel and the trunnion ring, including the maintenance-free Vaicon Link 2.0 suspension, for Converter #3. The converter bearings and the enclosure have also been renewed. The order included also removal of the existing vessel and assembly and installation of the new equipment. This had been handled by ZKS Ferrum S.A., the Polish partner in the consortium.

ArcelorMittal Poland is the leading steel producer in Poland, operating six production plants in the south of Poland. Its range of products includes profiles, rails, fittings for the construction, transport and mining industries, as well as flat products for the automotive industry and domestic appliances. The Dąbrowa Górnicza plant specializes in producing heavy profiles. It is also one of a few plants worldwide able to produce 120 meter long rails. 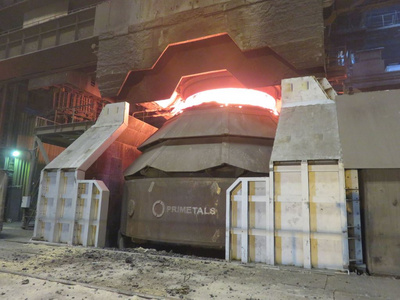 Please Note: worldsteelnews.com is not responsible for the content of third party sites